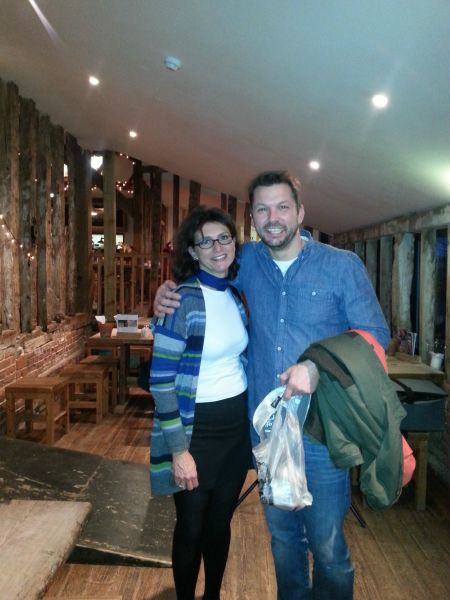 Food Uwrapped did a program on Monday the 16th of March about the Olive Oil sector in the UK,  they also selected six EVOO from different supermarkets to check if they were up to scratch. Fraud or mislabelling has always been a continuous problem in the Olive Oil industry. For this reason, when the  production team from Food Unwrapped contacted me to collaborate on its programme about the Olive Oil sector in the UK, I didn’t hesitate for one second. It is exciting to be on tv, although my cameo wasn’t more than 5 minutes. It was the most exciting bit of that episode of Food Unwrapped, as I made public the result about the test results of 6 different oils from the supermarket.

It was great to meet Jimmi Doherty and the rest of the team and to add my twopence worth to the programme. It was very interesting to see how the olives are ground in a stone mill to produce the paste where the oil is extracted. This system is not very common in Spain anymore and it has been replaced by martillos de acero. What was new for me was to find out know about the police in Italy in charge of fighting against fraud in this sector, although I can understand because of the big problem that they mentioned in the program that they had some time ago.

How is it possible that Italy consumes more EVOO than they produce and they also export Italian EVOO?….Scandalous!. About the six oils tested, what could we say???Some of them did not taste good at all. Obviously according to the sensory panel  3 of them didn’t past the test as Extra Virgin. But not many people know how EVOO should taste, so that could be the reason why people keep consuming these oils from the supermarket. But if they were not Extra Virgin, what else were they? Depending on the amount of the fault, they could have been Virgin Olive Oil or Lampante. Because Food Unwrapped didn’t publish the result so we don’t know what was the fault and how big it was.Virgin Olive Oil is a commercial category but so far, I haven’t seen a bottle being sold in London where I live. Lampante is not used for human consumption, not because is dangerous, but because the fault is so big that the smell and taste are nasty. Why don’t you join me in a tasting session to learn more about EVOO?. If you didn’t watch the programme that day, don’t worry you can watch it on their website from Food Unwrapped.